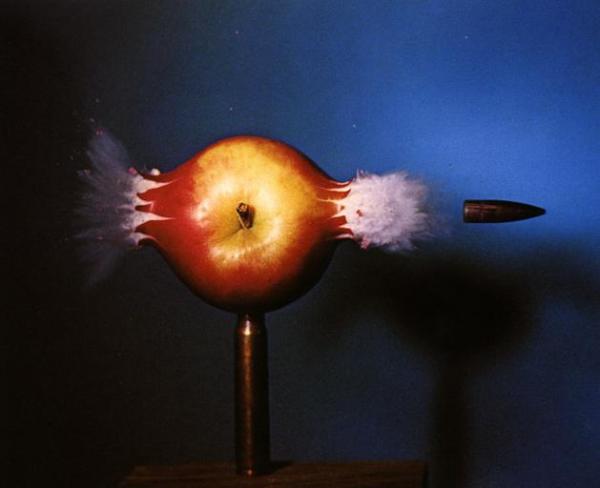 Advancements in cameras (or more specifically frame rates) has lead to some really cool applications, like all those super slow motion replays we now see during the major sporting events on TV

These super slow motion clips are captured at a whopping 1000 fps (frames for second). This means that in the time it takes you to count to 3 these cameras will have recorded a sequence containing 3,000 high resolution images, which is pretty impressive, and great for detailed analysis, fourth official replays and cheesy montages for the halftime ad breaks. But what if there was a camera that could capture more than 1000 fps, more than 10,000 fps… more than 1,000,000 fps?! What if we said to you 1,000,000,000,000 fps? 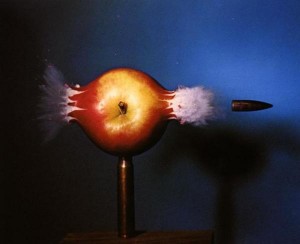 It all started in 1964 when an MIT professor by the name of Harold Edgerton, took a photo of a bullet piercing an apple using an extremely short exposure (the way the camera allows light to enter it’s image sensor) as short as a few nanoseconds. Inspired by his work, Ramesh Raskar and his team set out to create a camera that could capture not just a bullet (traveling at 850 meters per second) but light itself (nearly 300 million meters per second).

Wait! Pause just for a moment to take that in… Recording a ray of light as it moves at, well, the speed of light! The same light that is enabling you to read this text, the same light that travels for years through space so we can see the stars. For this task, they built a camera and software that can visualize pictures as if they are recorded at 1 trillion frames per second. Fundermentally, photography is about creating images by recording light, but Ramesh Raskar has invented a camera that can photograph light itself:

As if the ability to see light as it moves wasn’t amazing enough, the same photon-imaging technology can also be used to create a camera that can peer “around” corners , by exploiting specific properties of the photons when they bounce off surfaces and objects.

The ability to see objects hidden behind walls could be invaluable in the fields of medicine, search and rescue,engineering, the list goes on. Now scientists at the Massachusetts Institute of Technology in Cambridge have found a way to do just that. In a nutshell, they fire a pulse of laser light at a wall, the light (or photons) bounce off the wall, around the corner, onto the hidden object, back to the wall and back to the camera. With each refraction the photons scatter in various directions, but a small percentage eventually returns to the camera, each at a slightly different time. It’s this time difference that provides the key to revealing the shape and size of hidden object :

“We are all familiar with sound echoes, but we can also exploit echoes of light,” says Ramesh Raskar, head of the Camera Culture Research Group at the MIT Media Lab which carried out the study.

The prospect of this technology eventually reaching consumer level is mind blowing. We can’t wait to see the amazing things that artists and scientists will be able to produce using Femto Photography.